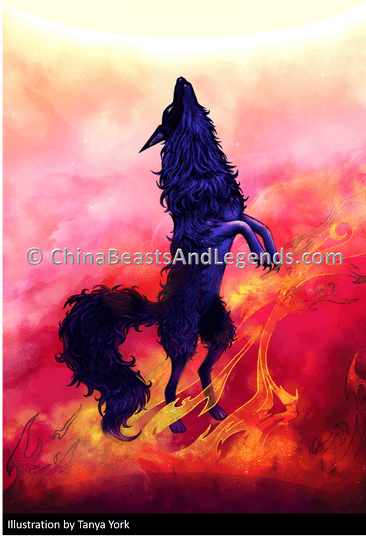 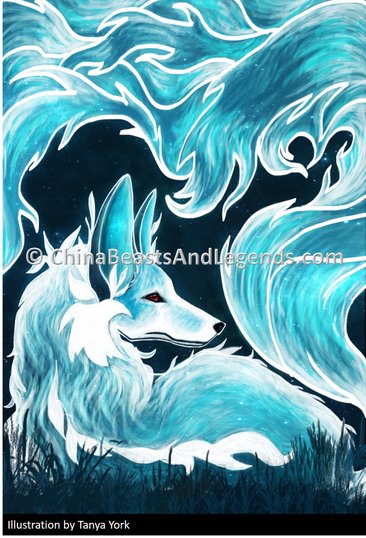 Tian Gou was first referred to in the "Classics of Mountains and Seas" first. Below is a snippet from the original text where Tian Gou is mentioned, followed by a rough translation:

“Another 300 leagues to the west lies Yin Mountain. The source of the River Zhuo Yu is located here and flows south into the Fan Marshlands. The River Zhuo Yu is full of marine life with patterned shells. On this mountain there lives a beast which looks like a fox* with a white head. It is called Tian Gou. The sound it makes is similar to “liu liu.” It can be used to ward off evil."

*The character "狸" to describe the shape of Tian Gou has been interpreted in different ways. Some translate it to "racoon dog", some "fox," and others to "wild cat." I personally do not understand where "wild cat" came from, but the other two are both valid interpretations in my view.

Best known for: Protection from harm

Tian Gou comes in two forms - one, a rare beast depicted as a white-headed fox that brings about peace and tranquillity and offers protection from harm, and two, a deity that is depicted as a black dog that eats the moon.

Upon further reading, it is unclear how these two creatures are linked at all. It could just be that two mythical creatures have been given the same name - Tian Gou.

There seems to be a lot of different versions of the origin story for Tian Ggou's second form. Each starts pretty much the same way, with the "soon-to-be" Tian Gou represented as a "black-eared hound" that is loyal to its master, Hou Yi (后羿 hòu yì). For more information on Hou Yi check his page out, but for the sake of Tian Gou's story, all you need to know is that Hou Yi is a master archer that is granted an Elixir of Immortality for his numerous acts of skill and courage (shooting down 9 of the 10 Suns and defeating several mythical beasts). From there, the official story goes:

Hou Yi's wife, Chang'E (嫦娥 cháng'é), took the elixir before Hou Yi in an act of selfishness (to maintain her youth). Shortly after she began to feel weightless and began to lift from the ground. As she rose to the heavens, Hou Yi's "black-eared hound" who was behind the door witnessed her betrayal and began to bark at her. The hound then licked the last drops of the elixir and also began to rise. As he did, he also grew in size. Seeing this, Chang'E sought refuge behind the moon, but the hound swollowed the moon in one, taking Chang'E with it. When the Jade Emporer (玉帝 yù dì) and the Queen Mother of the west (王母娘娘 wáng mǔ niáng niáng) heard that the moon had been swallowed by a giant hound, she ordered her soldiers to capture it. She immediately recognised the hound was Hou Yi's. She renamed it Tian Gou and assigned it to guard the Southern Gate of Heaven. Tian Gou received a "Seal of Grace" and spat the moon and Chang'E back out.

Another version states that Hou Yi's apprentice, Feng Meng (逢蒙 féng méng), breaks in to Hou Yi's house when he is out hunting in order to take the elixir of immortality for himiself. His wife, Chang'E, realising Feng Meng's intent quickly drinks the elixir and begins to rise in to the air. She finally reaches the moon and becomes a Lunar Deity, reluctantly leaving her husband on earth as a mortal.

Another version states that Hou Yi's acts of skill and courage go to his head, he proclaims himself king and becomes a tyrant that subjugates his people. Understanding that the elixir of immortality would allow Hou Yi to continue his rule of cruelty indefinitely, Chang'E drank it first. As she rose toward the moon, Hou Yi tried to shoot her down, but failed. She then hid behind the moon where she remains to this day.

And there's even another version that follows the official story word for word, the only difference being that Chang'E didn't take the elixir to maintain her youth, instead she took it because she found out that Hou Yi was being unfaithful to her!

It is for this reason that Tian Gou (in this form) is seen as a bad omen. In fact, his arrival (an eclipse) is welcomed by the beating of drums and the release of fireworks and firecrackers in an attempt to scare him off.

Best known for: Taking bites out of the moon and sun