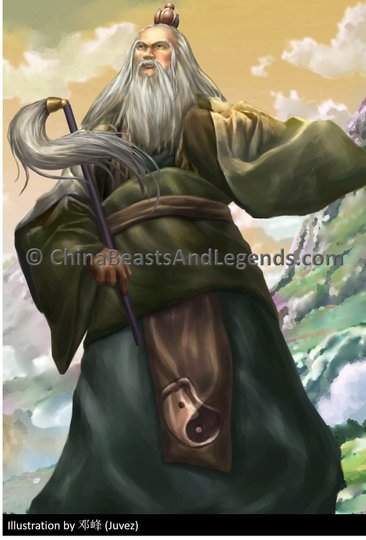 As one of the most ancient and respected deities in Daoism, Tai Shang Lao Jun is unsurprisingly known by many names and holds many respected titles, including, but not limited to, Dao De Tian Zun (道德天尊 dào dé tiān zūn) - literally "The Heavenly Lord of Dao and Virtue" - and Tai Qing (太清 tài qīng) - literally "the Grand Pure One." Even the name Tai Shang Lao Jun means "the Supreme Venerable Sovereign."

He is one of the Three Pure Ones (三清 sān qīng)1 and is believed to be the founder of Daoism. In order to bring his teachings to earth, he is said to have been reincarnated many times across history, the most famous incarnation of which was Lao Zi (老子 lǎo zi).

1 Often referred to as the Three Pristine Ones, or the Three Divine Teachers, the Three Pure Ones are the highest Gods in Daoism and are comprised of:

Best known for: One of the Three Pure Ones

Lao Zi was born in 571 BCE and died in 471 BCE2 He was a great thinker, philosopher, writer and historian, and the founder of Daoism. His philisophical work is still highly regarded to this day, on par with Confucious and Aristotle, regardless of any religious intent, which, at it's core, is centred around the belief that humans should live in harmony with the Dao (the way of nature and the Universe), be open-minded, modest, and rid ourselves of materialistic obsessions and the lust for "things".

2 Though there is some disupte amongst historians as to whether or not Lao Zi really existed, the vast majority believe he did. And for those who do believe he existed, there is further disupte regarding when he was born, and when he died.

Some parts of his story may have been fabricated, especially those with relation to the divine, but then, all good stories deserve a little embellishment.

In the Journey to the West (西游记 xī yóu jì), Tai Shang Lao Jun and the Monkey King (孙悟空 sūn wù kōng) didn't exactly see eye to eye. In fact, before Tathāgata (如来佛 ruò lái fú) intervened, Tai Shang Lao Jun and the Jade Emperor (玉帝 yù dì) tried to execute the Monkey King for all the trouble he had caused in Heaven, on earth, and in Di Yu (地狱 dì yù). But after trying and failing miserably with conventional methods, Tai Shang Lao Jun suggested they use his Brazier of Eight Trigrams (八卦炉 bā guà lú) to separate the ellixir - which at this point had formed a single solid mass in his stomach - weaken his body, then execute him. And so they tried, but to no avail. The Monkey King survived.

He was also renowned for his alchemy skills and spent much of his time brewing the Ellixir of Immortality (仙丹 xiān dān).