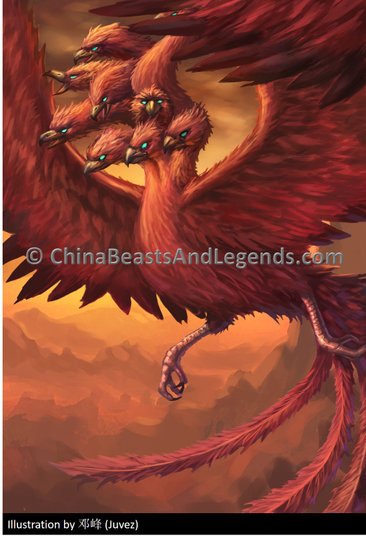 The Nine-Headed Bird is a legendary bird from Chinese mythology. Also known as Gui Che (鬼车 guǐ chē), it was originally recorded in the Classic of Mountains and Seas (山海经 shān hǎi jīng), and again in Chu Ci (楚辞 chǔ cí) a few centuries later.

According to the original description it had ten necks and nine human heads, however, over time the heads were more often depicted as bird-heads instead. The tenth head is said to have been shot off by a hunter, leaving the headless neck to bleed continuously.

Since the character for nine (九) sounded similiar to the character for ghost (鬼) in ancient Chinese, the bird was often referred to as the Ghost Bird (鬼鸟 guǐ niǎo), which fitted well with it's ominous nature. After the Han Dynasty (汉代hàn dài) (206 BC–220 ADE), the Nine-Headed Bird gradually developed into a demon bird (妖鸟 yāo niǎo) that collected Hun Qi (魂气 hún qì)1, and was recorded in many later poems.

1 Hun Qi is best described as the spiritual energy (Qi) of a Hun2.

2 According to Daoism, the soul is made up of 10 individual components; these are known as the 3 Hun (魂 hún) and the 7 Po (魄pò). Put simply, the 3 Hun – often referred to as the “cloud spirits” – make up the ethereal component of a soul, and the 7 Po – often referred to as the “white spirits” – make up the corporeal component of a soul. Upon death, the 7 Po dissipate along with the body, and the 3 Hun each take separate paths.

The ancient Chinese believed that if a Nine-Headed Bird ever flew overhead, one should extinguish all lights immediately and let dogs loose to scare the beast away. Otherwise the Nine-Headed Bird would suck the Hun Qi from any child it got it claws on.