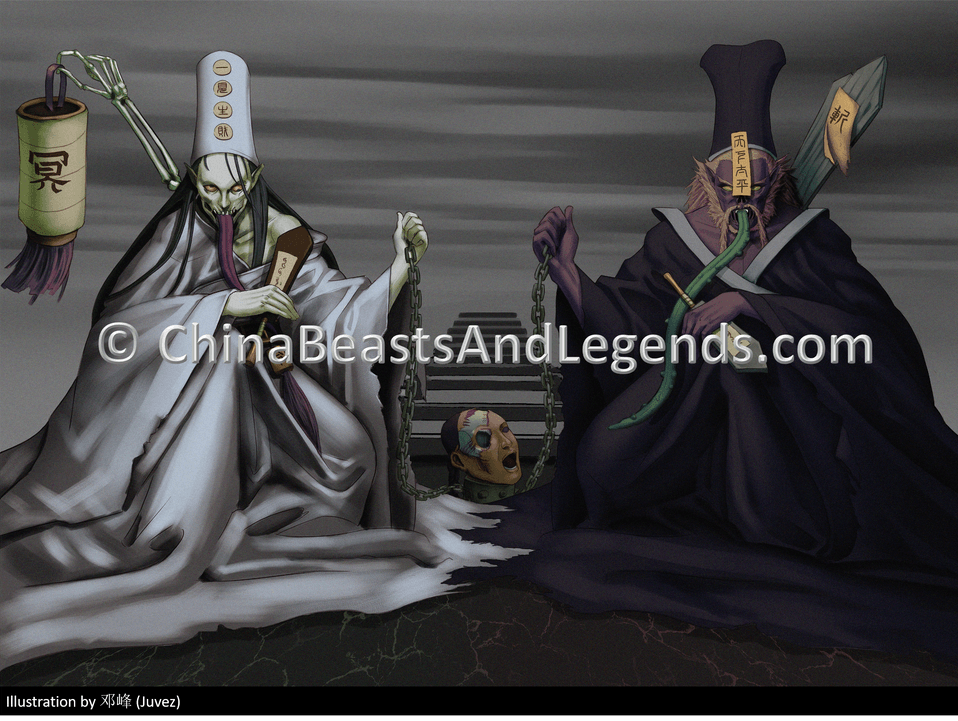 They are generals of the Shadow Realm (阴间 yīn jiān), where they reside, and are tasked with collecting the spirits of the dead as they pass into their realm. Originally, Black and White Impermanence took their orders from Yan Luo Wang (阎罗王 yán luó wáng), the Guardian of Di Yu (地狱 dì yù), but since his demotion to the 5th Court of Di Yu, they now answer to Qin Guang Wang (秦广王 qín guǎng wáng), and help him reward the good and punish the evil.

White Impermanence's name is Xie Bi An (谢必安 xiè bì 'ān) and is representative of Yang (阳 yáng) - order. He is described as being tall and scrawny, has a pale white face, and is always smiling with his tongue hanging out. On his hat are written these four characters "一见生财" (yī jiàn shēng cái) which roughly translated means he is a harbinger of good fortune. He brings luck to those who are thankful to and respect the Gods.

*In the Daoist belief system, the soul is made up of multiple components; three Hun (魂 hún) and seven Po (魄 pò). The Hun is the ethereal component of the spirit, and is closer to the western concept of a soul that enters another realm after death. The Po is the corporeal component of the spirit, perhaps better thought of as a tangible consciousness that is connected to the body and is taken to the grave. Po is made up of Yin (chaos) and Yang (order).

Black Impermanence's name is Fan Wu Jiu (范无救 fàn wú jiù) OR Cheng Wu She (称无赦 chēng wú shè) and is representative of Yin - chaos. He is described as being broad and fat, with a small head, dark complexion, and a constant fierce expression etched on his face. On his hat are written these four characters "天下太平" (tiān xià tài píng) which roughly translated means "peace on earth," and indicates that there is no pardon for those who are guilty of violating the laws and regulations on earth.

Once they have a Hun shackled, Black and White Impermanence escort them to the Gates of Hell (鬼门关 guǐ mén guān) and hand them over to another two demons called Niu Tou Ma Mian (牛头马面 niú tóu mǎ miàn) one with the head of a bull the other with the head of a horse. From there, the Hun will be taken to the Ruler of Di Yu to be judged in accordance with how they lived their life on earth.