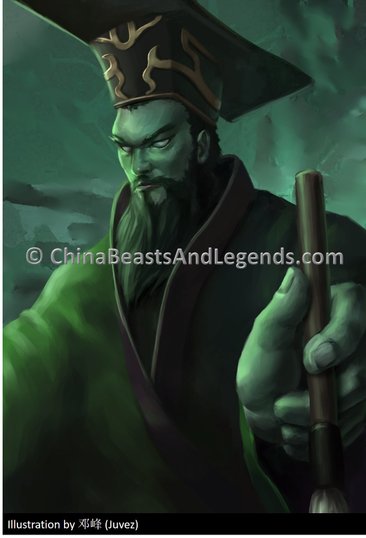 Du Shi Wang, or King Du Shi, resides in the Eighth Court of Di Yu (地狱 dì yù), where he passes judgement on the souls (魂 hún) that are brought to his domain.

The Eighth Court of Di Yu is located under the Wo Jiao Stone (沃焦石 wò jiāo shí) that marks true west, which in-turn is located at the bottom of the Great Sea. The Eighth Court is said to stretch over 8,000 leagues, and has 16 additional "sub" Di Yu.

As the Yama of the Eighth Court, Du Shi Wang passes judgement on souls that have been sent to him by Qin Guang Wang (秦广王 qín guǎng wáng). These souls will have committed crimes of the following nature in their previous life on Earth - also known as the Yang Realm (阳间 yáng jiān):

1. People who do not show filial piety toward their parents, grandparents, and elderly relatives;

Depending on the severity of each individual crime they committed, the soul will go through 1, many, or all of the 16 sub Di Yu that reside within the Seventh Court. Each of the 16 Di Yu are named after the torture method that is used within. The souls are tortured in each sub Di Yu for a period of time that the Yama judges to be necessary. Should they "die" during the process, or if they lose a limb for example, the soul will be "repaired" or "resurrected" again for the next round. And so on, and so forth.

Best known for: Presides over the 8th Court of Di Yu

Some of the torture methods include having your limbs broken off one by one, and being trapped in a boiling cauldron.

1 Given the time period, can only assume this meant a cart of some form.

To read more on Di Yu, check out my blog: A Journey Through Di Yu - "Chinese Hell"