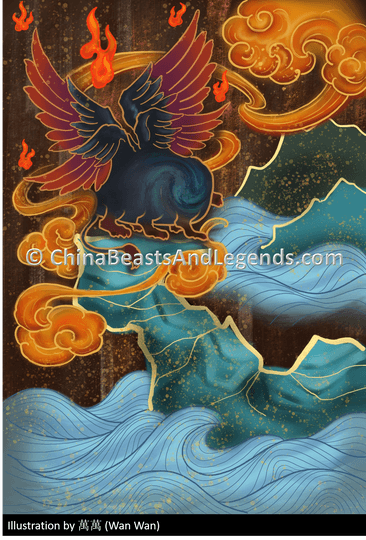 Di Jiang - sometimes referred to as the Divine Di Jiang 神灵帝江 (shén líng dì jiāng) - is one of the stranger and more ancient deities in Chinese mythology. He is described as resembling a yellow sack with six legs, 4 wings and no face. Where the face should be, there is only chaos. Later versions of Di Jiang have seen him portrayed as having crimson skin, black skin and flesh coloured skin.

And to top it off, in accordance with the Classic of Mountains and Seas, despite having no eyes, mouth, nose or ears, Di Jiang is said to enjoy singing and dancing.

In some mythologies Di Jiang is said to be a direct 'descendant' of the Creator of the World, Pan Gu (盘古 pán gǔ), that Di Jiang was one one of the deities born of Pan Gu's final breath.

In other mythologies, Di Jiang is referred to as Hun Dun (混沌 hùn dùn) - literally 'Chaos' - and is said to be one of the Four Evils.

Best known for: Has no face